A change in the blog schedule this week as I’m planning on updating more than twice with a Seattle series.

After graduating from high school, I promised myself that I wouldn’t live in any one city for longer than 5 years. The perpetual Five-Year-Plan of logistics was no doubt a side effect of growing up in small town Salina, KS. Moving to a completely new city may seem daunting to most people, but around the 4th year of taking up residence somewhere, my feet would start to itch with the need to wander, and my heart would ache for new adventures. I’ve always been able to happily bid goodbye to a city (save for the friends I’d made) from the rearview mirror of a car, but Seattle was the outlier. The morning of my departure in 2011, my friend Jon picked me up to take me to the airport, and as I kept looking back to watch Seattle’s skyline shrink into the horizon, I was surprised to find myself struggling against tears.

When I decided to move back to the Midwest, I joked about my breakup letter to my home of 4.5 years: 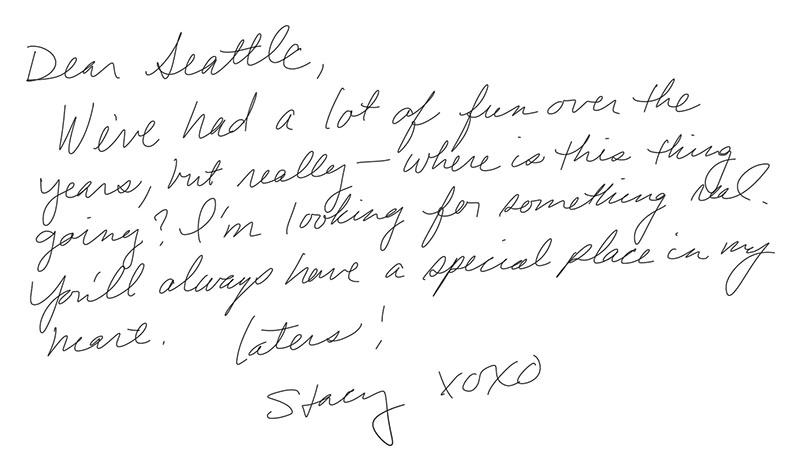 Since leaving Seattle five years ago, I’ve lived in Ann Arbor, MI and Philadelphia, PA. There were 2 instances when I almost moved back to the PNW (that’s the Pacific Northwest for those of you unfamiliar with the acronym). Although now I’m successfully rooted in Philadelphia, I still rave with some annoying consistency to anyone who will listen about my friends in Seattle and the city itself.

Graham: Want to go out for Pho?

Me: Please. Seattle has the best pho places. And nothing beats Pho Bac. I hate going out for pho here; *sigh* it’s like setting myself up for disappointment.

Graham: You probably shouldn’t be walking through that neighborhood that late at night.

Me: *sigh* You could walk EVERYWHERE in Seattle and not have to worry!

Me: I never had AC in Seattle. You don’t need it except for 3 days in the summer when you just park yourself in a movie theater. Oh, and the sun doesn’t set until like 10:00 at night . *Sigh*

You get the point. I’m one of THOSE people.. Annoying progressive PNW elitist.

So when Graham and I were trying to decide where to go this summer, I readily accepted his challenge of “Why don’t you show me what’s so great about Seattle.”

Don’t get me wrong.. I love Philly.. but.. Seattle is like that ex you broke up with because you were aiming for something better and more stable, but after several months go by, you start questioning whether you made the right decision.. and then start wondering if you’re viewing the past relationship with the rose-colored glasses that time and distance provide. This trip was going to be my chance to find out by reconnecting with my old flame, the Emerald City, and staying in my old neighborhood in Capitol Hill.. and I didn’t even have to throw out a passive-aggressive Craiglist missed connection to have that chance.