Rekindling a romance with an ex is hardly ever a good idea; although sentimental feelings may initially get the better of you, sooner or later, two things may happen. One is that you realize that you’ve both changed too much for it to work.

In spite of the parks, food (Graham finally got to try a Seattle dog straight from the cart… 3 times), and scenery, the city’s gone through some major changes since I left. Modern boxy a”pod”ments have cropped up all over the city. There’s a Panera Bread on Capitol Hill.. A Panera Bread! I have nothing against Panera Bread, but to see it sprout up on the first floor space of condo building made me sad. So many of my favorite places have closed their doors.. and Capitol Hill seems to be resonating a different vibe. The average price of a one-bedroom is now over $1600/mo. I remember when mine cost $900/mo. I know.. my complaint is betraying my age. I don’t know how many times Graham heard me wail, “What the heck is this?!” every time we happened across a new micro-condo building or flashy-looking bar. “The Seattle I knew has jumped the shark!”

Okay, that whiney comment isn’t fair. It seems like the changes happening to the old neighborhoods are to accommodate the younger transplants attracted to the abundance of both established tech companies and start-ups. My surliness stems from my intense dislike of box-y buildings (it’s so silly how “easy to use, out of the box” housing literally puts you in a 225 sq ft box) and the younger generation.. so in other words, the stereotypical attitude that “everything was better before” that comes with age.

The second thing that inevitably happens is that your differences start to resurface.

If you ask my friends and family to describe me, “laid-back,” will make an appearance on the list.. as “whatever the hell the antithesis of laid-back is.” True. Before I moved to Philly, I’d never lived on the East Coast. Yet, for some reason, people have always been surprised that I grew up in the Midwest and lived in Seattle, usually pinning me, instead, as a stereotypical angry East Coaster. Graham got to witness my impatience rearing its ugly head during our vacation: “WTF! These people need to just get the hell off the sidewalk if they’re not going to actually move!”

Yes, I am, by nature, an angry person. Sorry. <— Apparently, really apologetic about it. 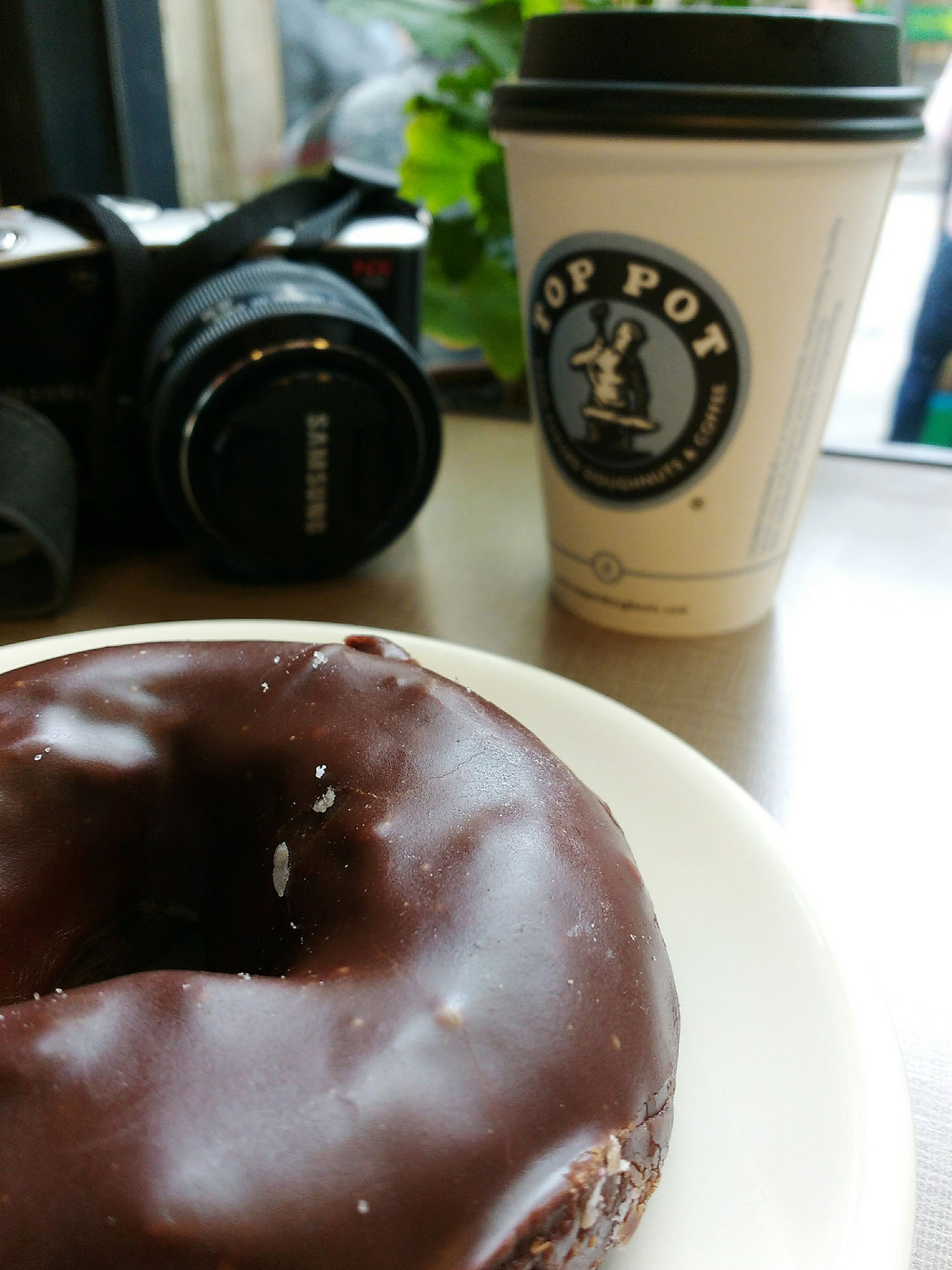 There was one particular incident that soured a large portion of our Monday afternoon. We stopped off at Top Pot Doughnuts after finishing up the Underground Tour (highly recommend it.. even for long-time Seattle residents if you’ve never done it) and got coffees and shared a doughnut. We needed to get back to Capitol Hill to make it to drinks with some friends, so Graham took his coffee with him to finish up on the way.

Within a few blocks though, the peacefulness of the day was interrupted by a rogue dufflebag that a passerby walking in the opposite direction without a sense of diplomatic personal space wildly swung into Graham’s coffee.. covering both our cardigans, my jeans, t-shirt, and bra in lukewarm latte. The man muttered an “ooops,” as he continued walking.. no apologies.. no stopping. Graham and I both yelled profanities after him.. but y’know.. not too loud.. we felt conspicuous disrupting the laid-back West Coast vibe of those around us who stared in bewilderment at bridled East Coast fury. 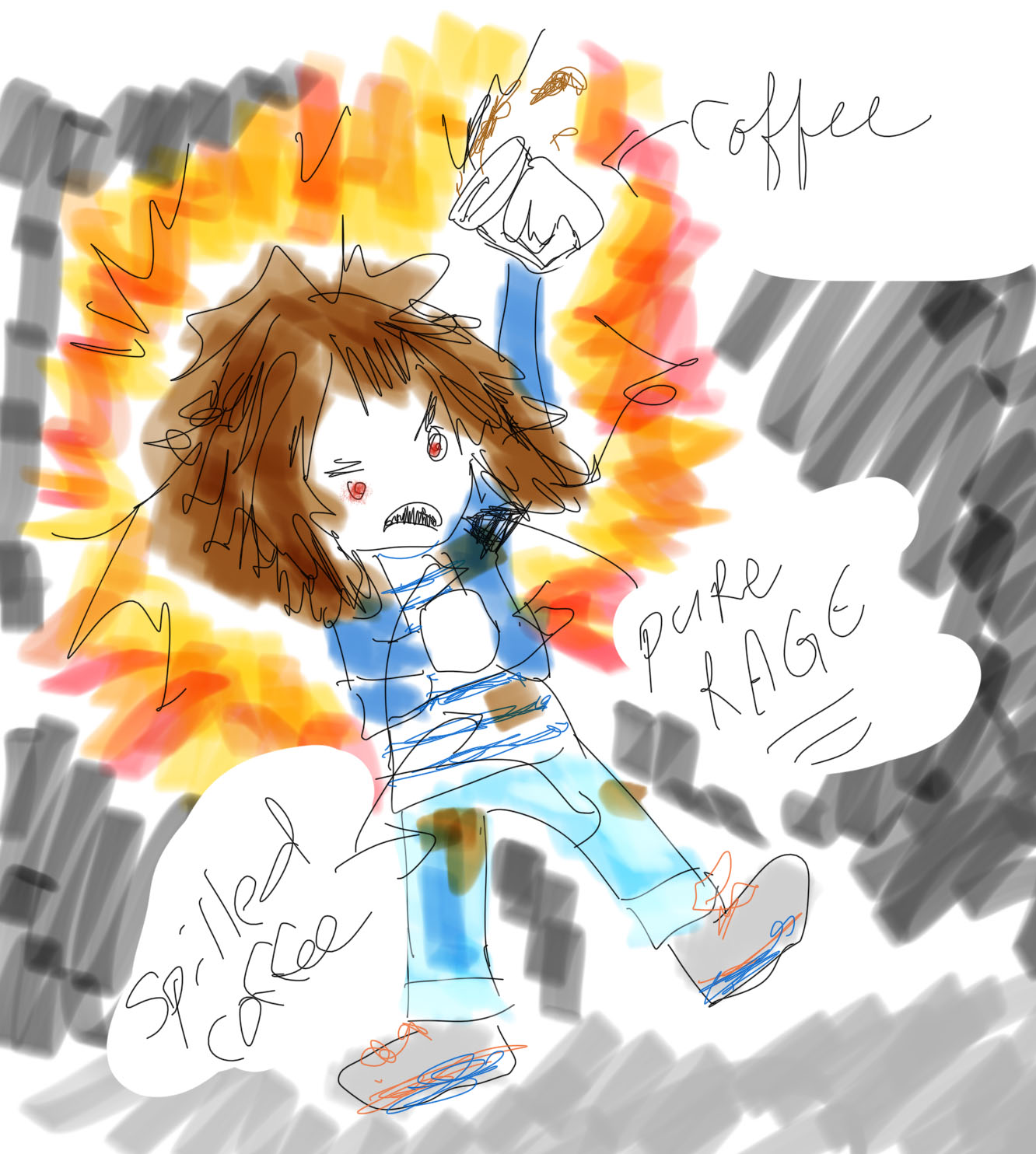 While we searched for a Tide pen on our way back to our AirBnB (a brand new pen I’d eventually need to use all of on just 2 articles of clothing), I kept thinking, about how much I wanted to unleash the wrath of a Philadelphian on that guy. That’s when I realized, in spite of all my Seattle-raving.. Philadelphia really is where I belong.

So… here’s my revised break-up letter to Seattle.. 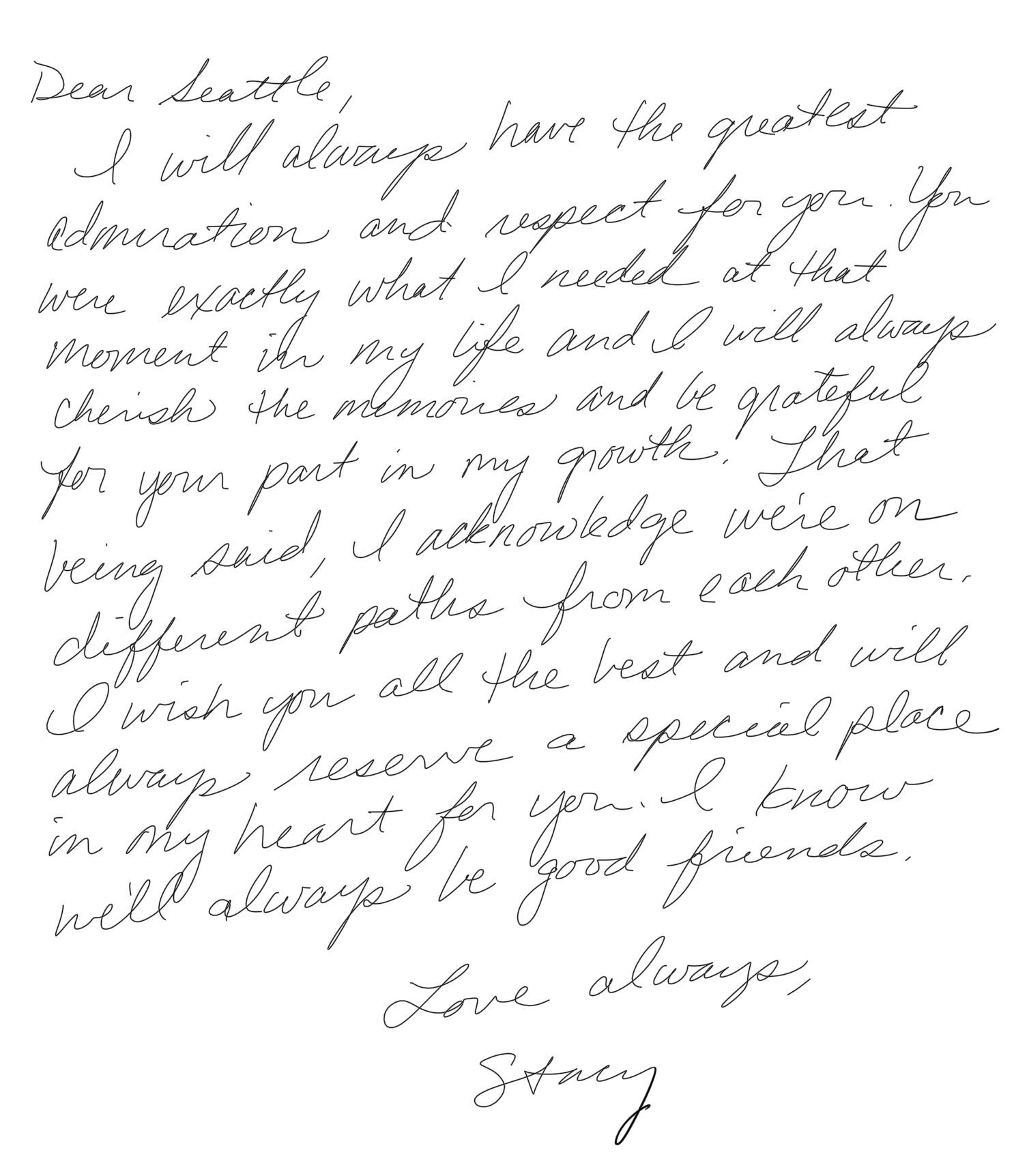 When processed through the Stacy-Handwriting-Decoder:

I will always have the greatest admiration and respect for you. You were exactly what I needed at that moment in my life, and I will always cherish the memories and be grateful for your part in my growth. That being said, I acknowledge we’re on different paths from each other. I wish you all the best and will always reserve a special place in my heart for you. I know we’ll always be good friends.