I’m not a wedding person. I always assumed that if I ever got married, there would be an elopement or a small excursion to city hall.. and really, when your city hall is as gorgeous as Philadelphia’s, the latter is extremely enticing. picking your flowers, wedding party, dress, (oh, who am I kidding, I have a sweet tooth.. that’s probably one of the best parts of planning your wedding), etc. seemed way too stressful for a one day production number.. not to mention the bridal shower / rehearsal dinner / bachelor(ette) parties that lead up to it. Of course, I never really thought deciding how to get married would ever be something I’d have to face. for the longest time, I wasn’t sure if I even wanted to be married. 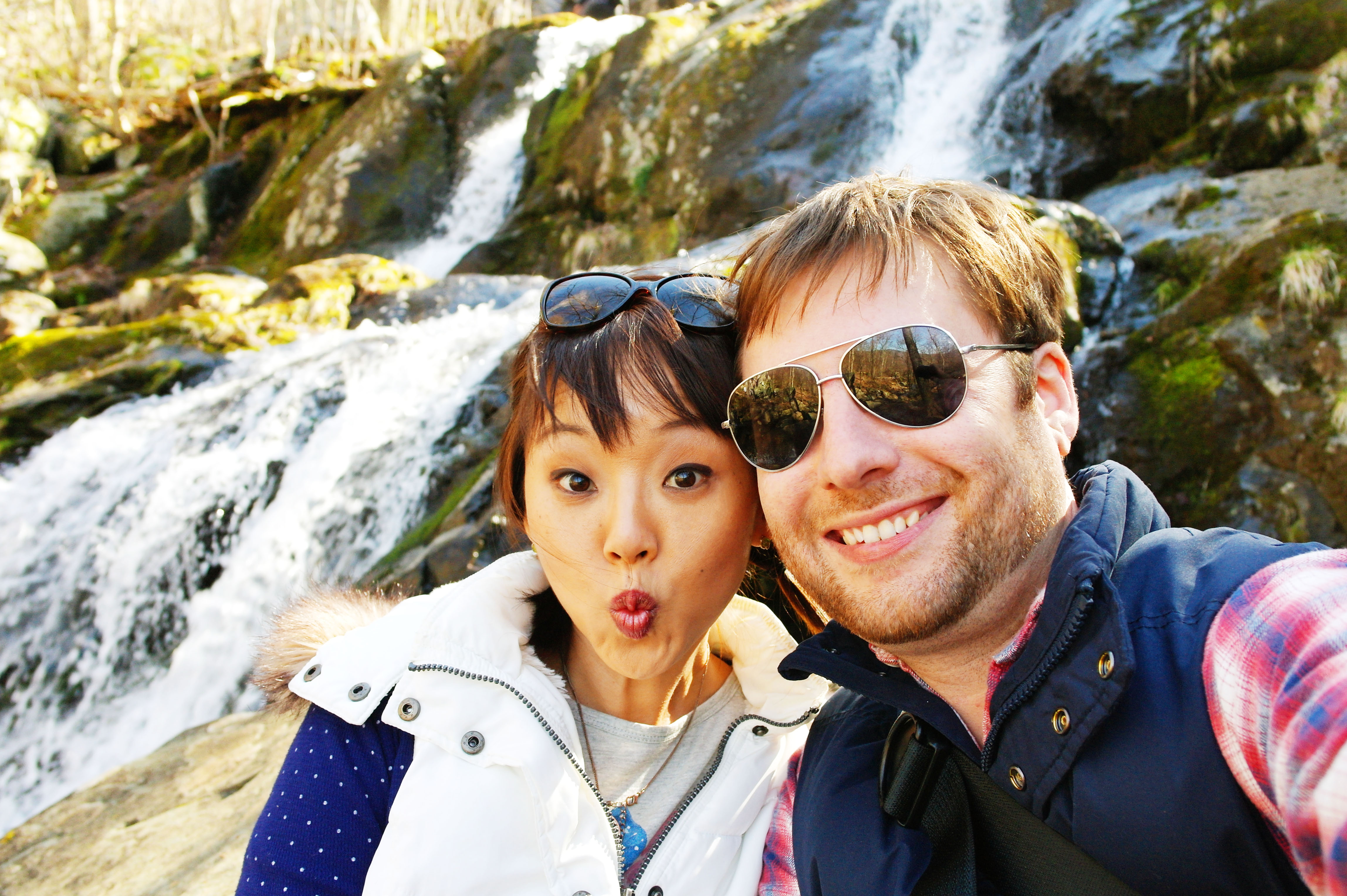 After coming back from our DC / Blue Ridge Mountains / Baltimore road trip, I can’t say I was surprised being engaged to Graham. All doubts I ever had about marriage had long since vanished during the year and a half we’d been together However, I’m sure as those of you who have been on the “Just Engaged!” train know, the wedding interrogations began.

Have you picked (fill in the blank with any of the below)?

The same questions.. from friends, family, acquaintances (I was even cornered by one of the ladies who works at our favorite banh mi shop).. in that cliche good cop / bad cop fashion.. it started to feel as though the pressure of questions were being pummeled at us to secure that “Aha!” moment when people could ensnare an opportunity to give their 2 cents. I’m sounding cynical. I’m sure that wasn’t the intention of everyone who had been curious enough to ask about our plans (or lack thereof). To be fair, I did take some advice to heart.. like opting to find a photographer rather than go without (this insight came from one of my hair stylists.. I told you EVERYONE had advice).. but I had definitely been sweltering underneath the intense interrogation lamps.

I was looking forward to marriage.. but every passing opinion/advice filled day made a wedding seem less like a celebration of a union and more like a chore, to eventually, the 13th labor of Hercules or a punishment devised for an inner circle of Dante’s “Inferno.” Unfortunately, the prospect of an elopement was looking less likely as we agonized over the thought of hurting the feelings of our friends and families. Our wedding day and marriage would be about us.. but ‘us’ included our families with whom we had extremely strong ties and the friends who had supported us as singles.. as individuals in other relationships.. and finally as “us” in a happy twosome. A lot of wedding articles advise that this day should be about “you” (the couple), and to do what you want. Honestly, I couldn’t handle the pressure of opinions to just easily ignore other people’s expectations. 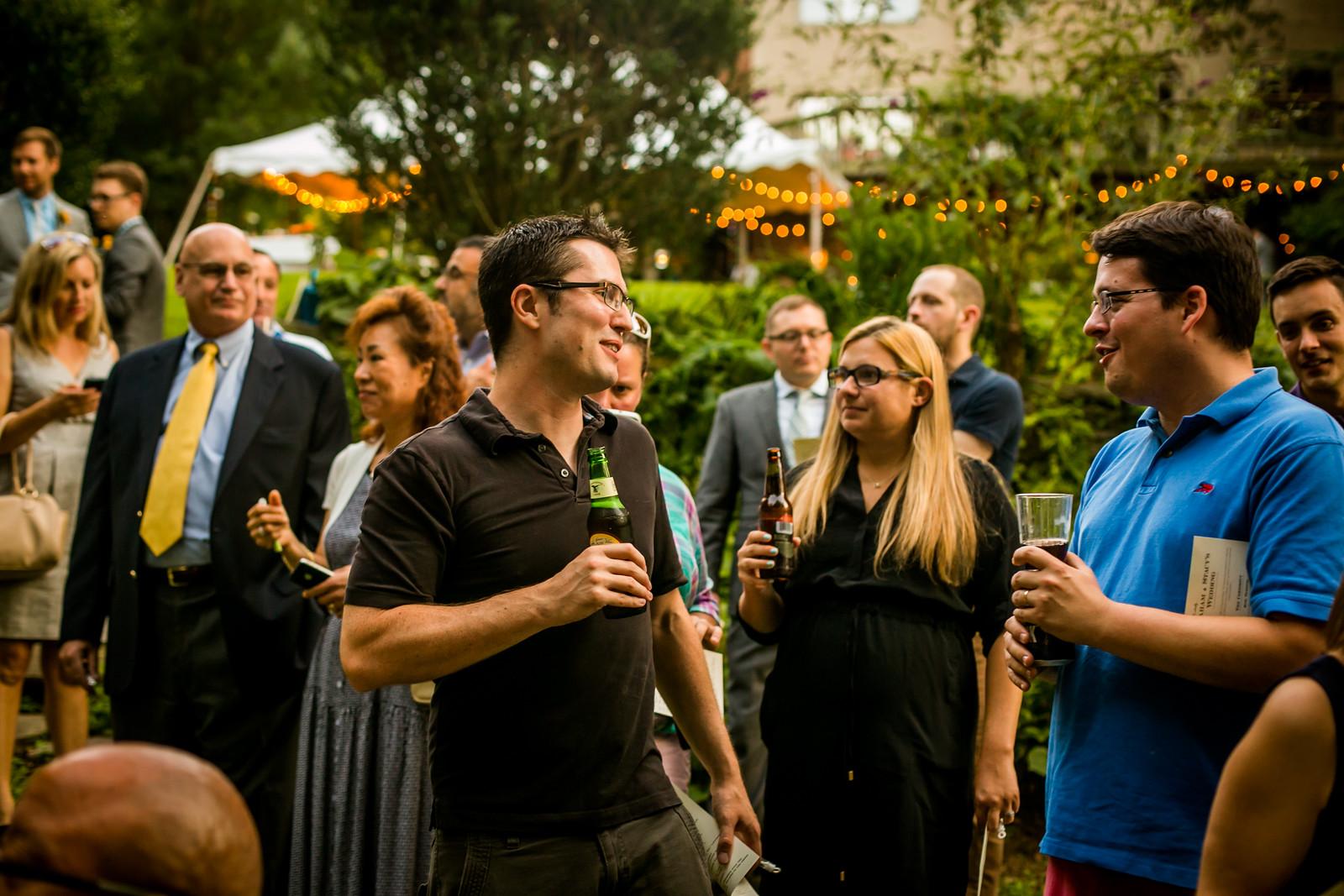 One evening, about a month after being engaged, Graham and I were sitting on the stoop of our home in Graduate Hospital, people-watching the playground across the street when I asked him about whether he remembered a certain indie flick I’d dragged him to the summer before. I won’t let on the title to keep the film spoiler-free, but it featured two characters who tied the knot with a surprise wedding under the guise of an engagement party. After seeing the film, we’d joked about how great it would be to pull off something like it, but never really talked about it again. That night, I asked him if he thought he’d be open to the idea.. he didn’t even hesitate, “Let’s do it!”

Right away, as we turned a wedding with a party into a party that just happened to include a wedding, excitement ensued. There was still a certain amount of stress involved, but it was.. “stressfully entertaining” as we set about figuring out the best venue, logistics, and disguise for the wedding to keep things hush-hush.

We DID get some pushback from my future mother-in-law who initially thought Graham and I were nuts. “I don’t understand all this. Why wouldn’t you want to tell people?” I was worried we’d disappointed her. The days following our announcement to her left me apprehensive, but Graham reassured me she would eventually come around once the idea had some time to marinate. Hah! In a week or so, that little time to marinate burst into a full enthusiasm flambe on her side. I couldn’t have been more relieved or grateful for her open-mindedness and thoughtfulness as she began combing my Pinterest page to figure out ways to help. With my own mother continents away, she provided me a lot of the support and insight I needed at critical times. 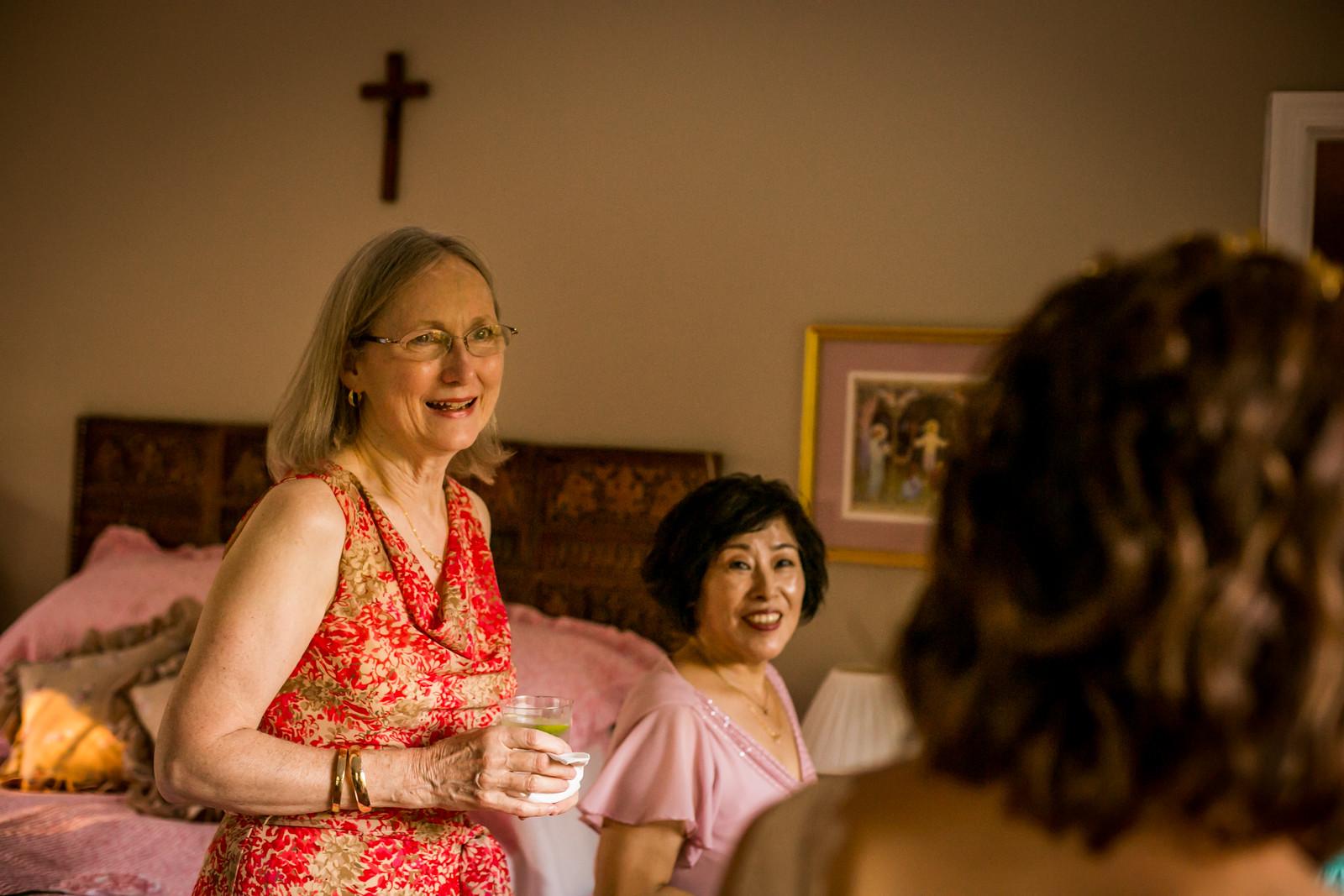 We had about 3 months to plan. A lot of engaged couples have done it in less than that.. and honestly, I’m convinced they’re super-humans. During those 3 months, we still got the frenzy of typical wedding questions, but whenever anyone would ask, we used the excuse that my mother was still visiting Korea so we wouldn’t be able to make any real decisions until she returned… especially finalizing the wedding date. We no longer had expectations to meet except our own.

We sent out invitations for our “engagement party” (which became the guise for our wedding) in June, 2 months before the big day. We kept it relatively small with about 70 people, and the majority of them RSVPed “Yes.” To keep things inconspicuous, we had it in the backyard of Graham’s family home rather than anywhere else that would require a booking. Besides, having our wedding there had personal meaning for us since not only did Graham grow up there, but his parents had built the house. 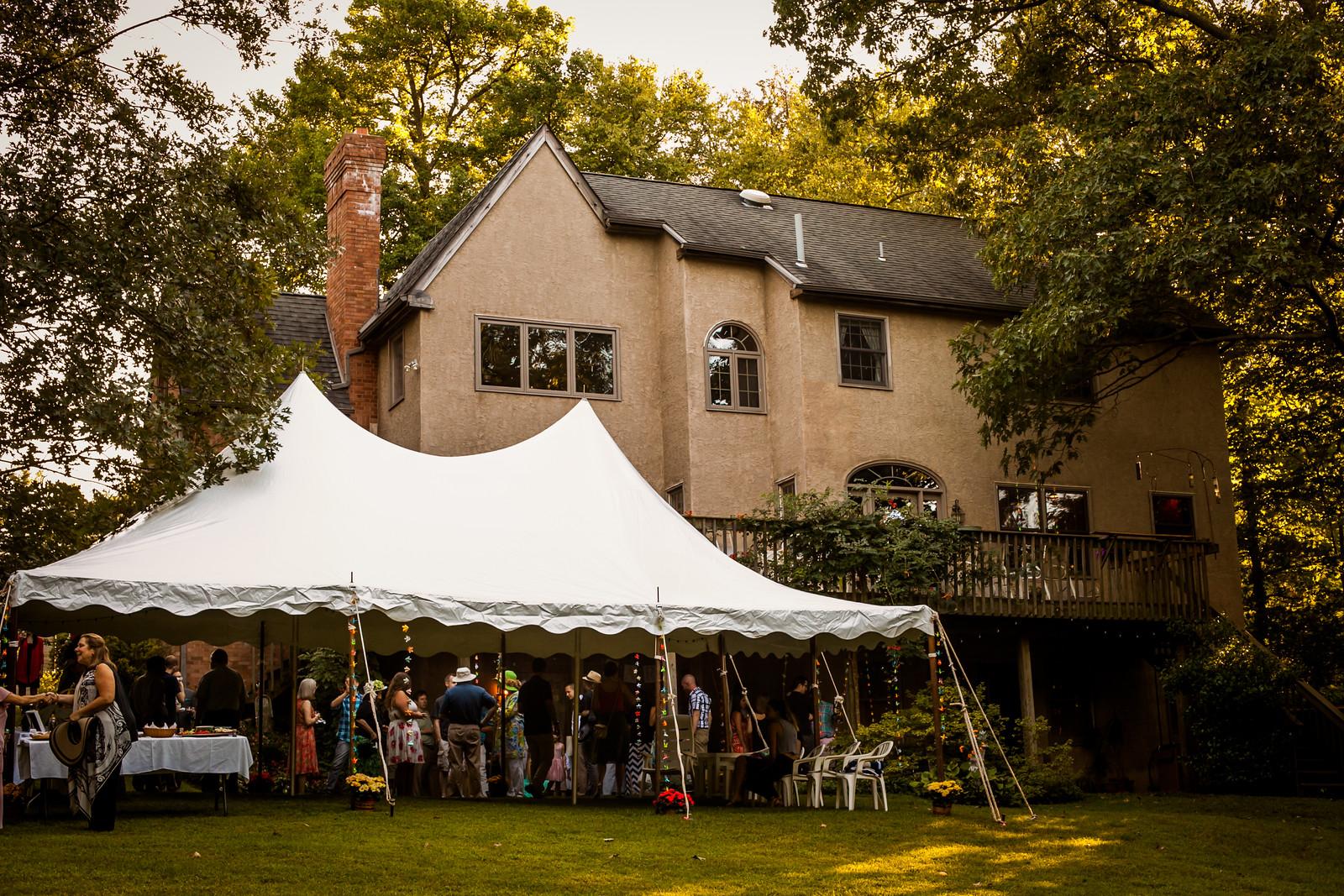 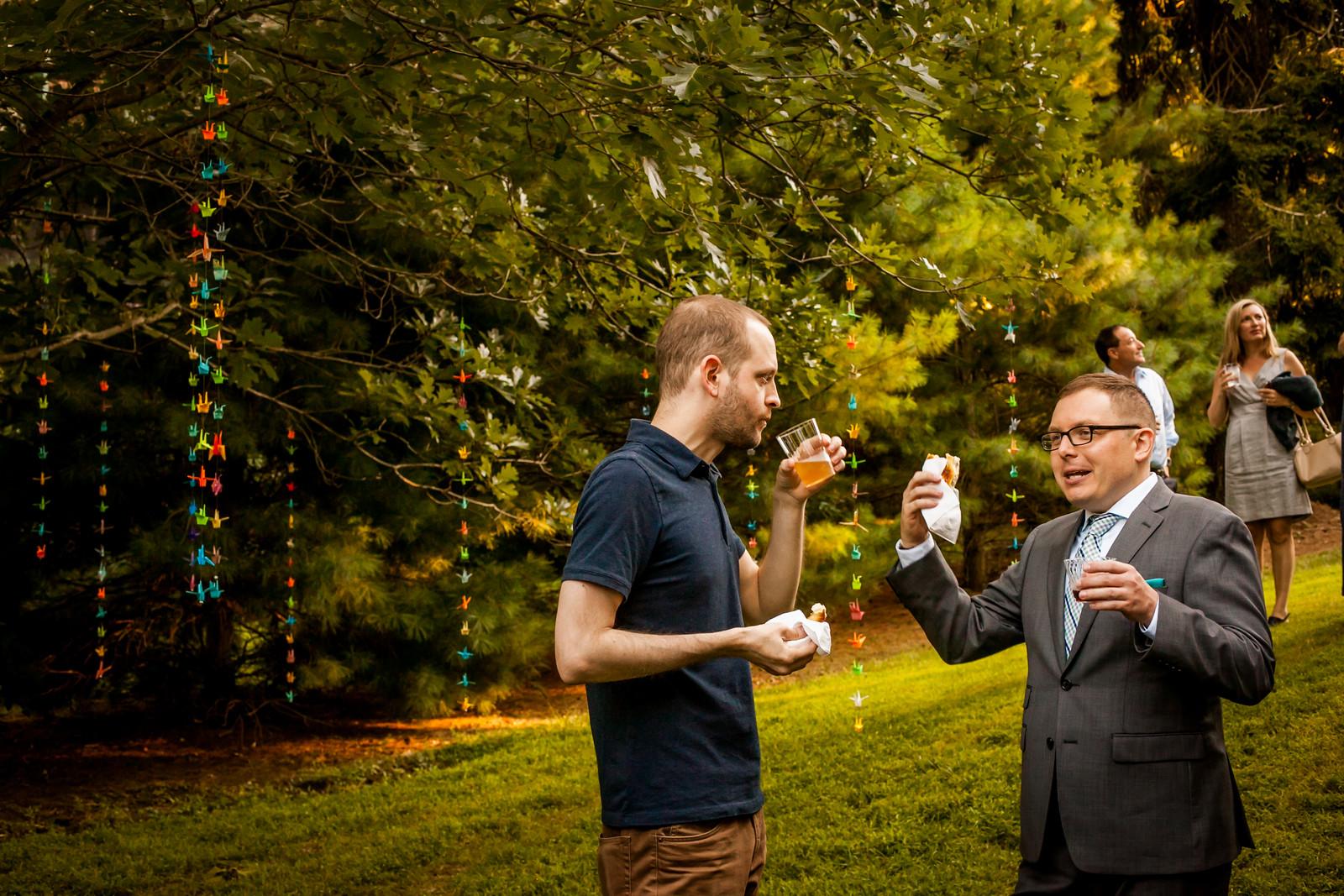 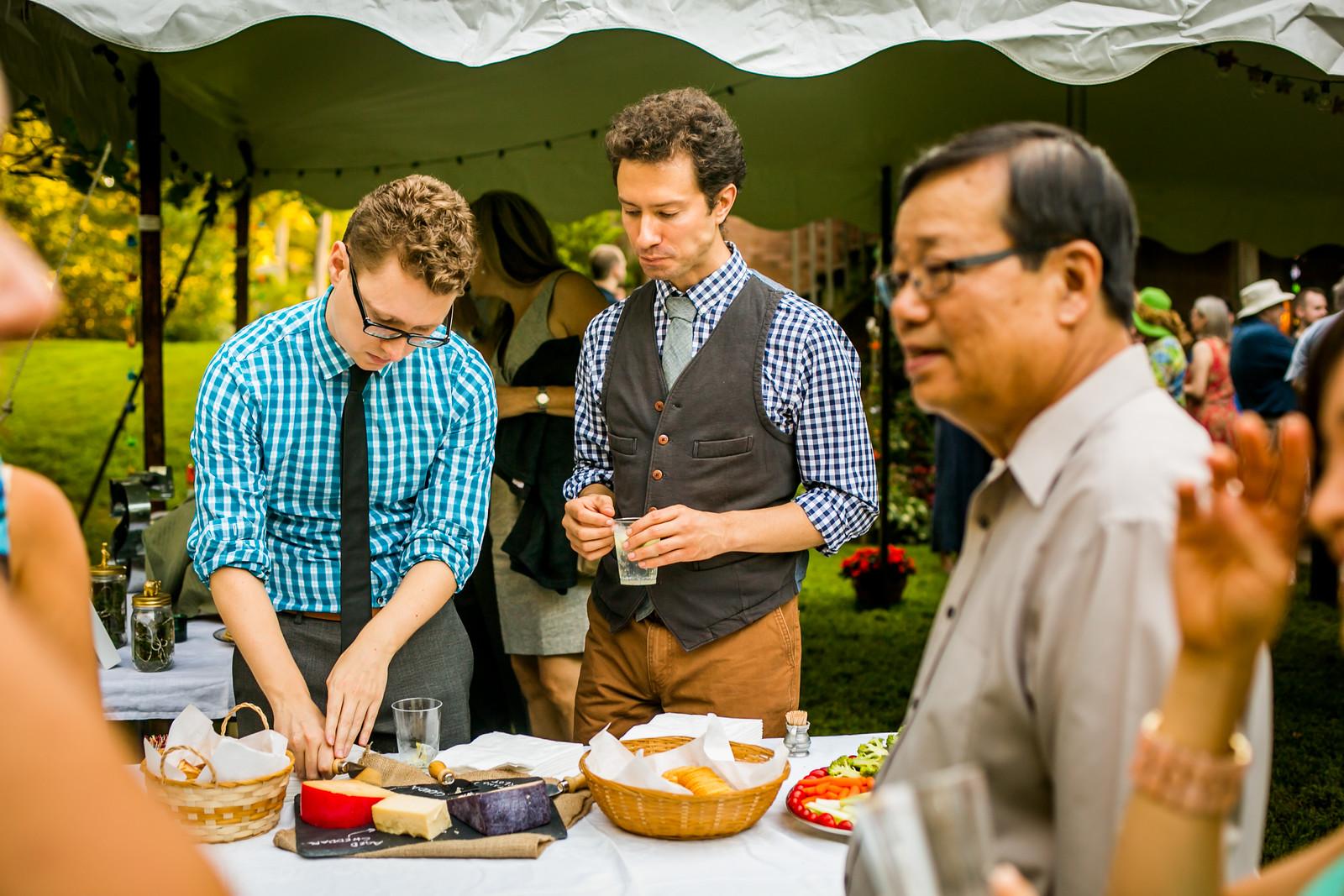 Once everyone had arrived and had had a few cocktails, we nervously took our place in front of our guests, giving them the impression that we wanted to extend a formal greeting. 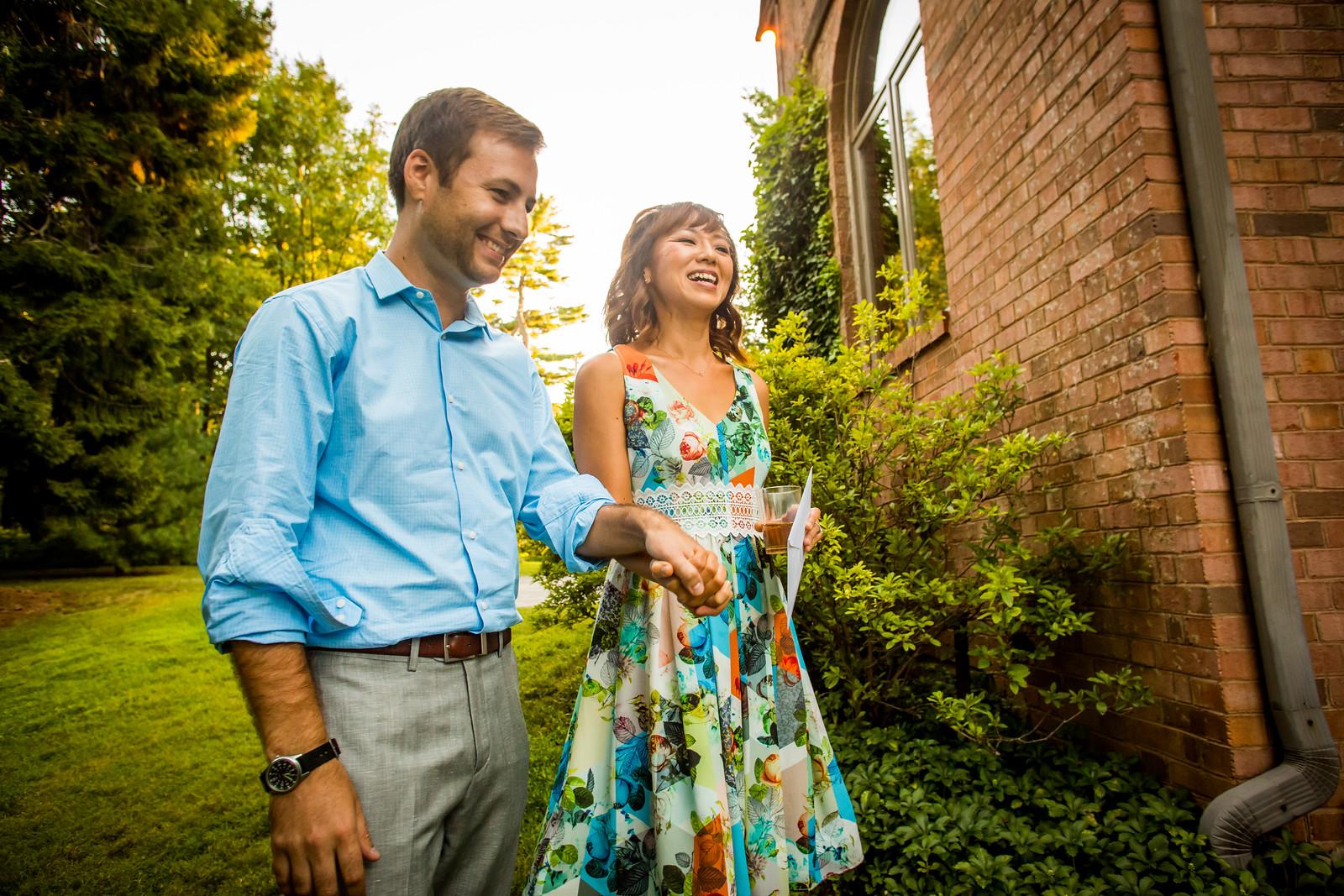 We thanked everyone for coming, and Graham added that we had FINALLY picked a wedding date. “WHEN?!” came the syncopated question from our friends and family. “In half an hour!” replied Graham.

Let me just say.. THESE were our favorite photos from the day! 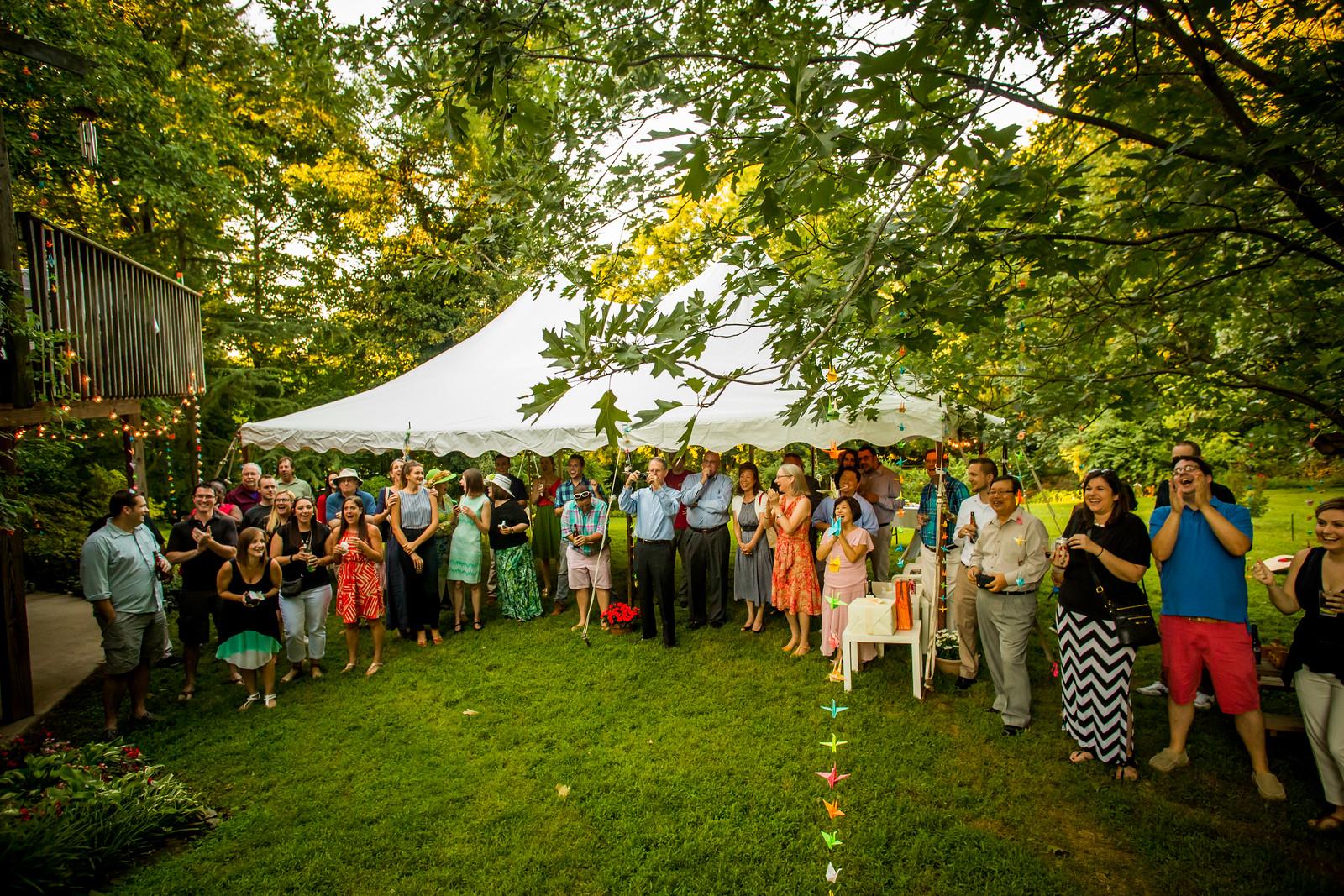 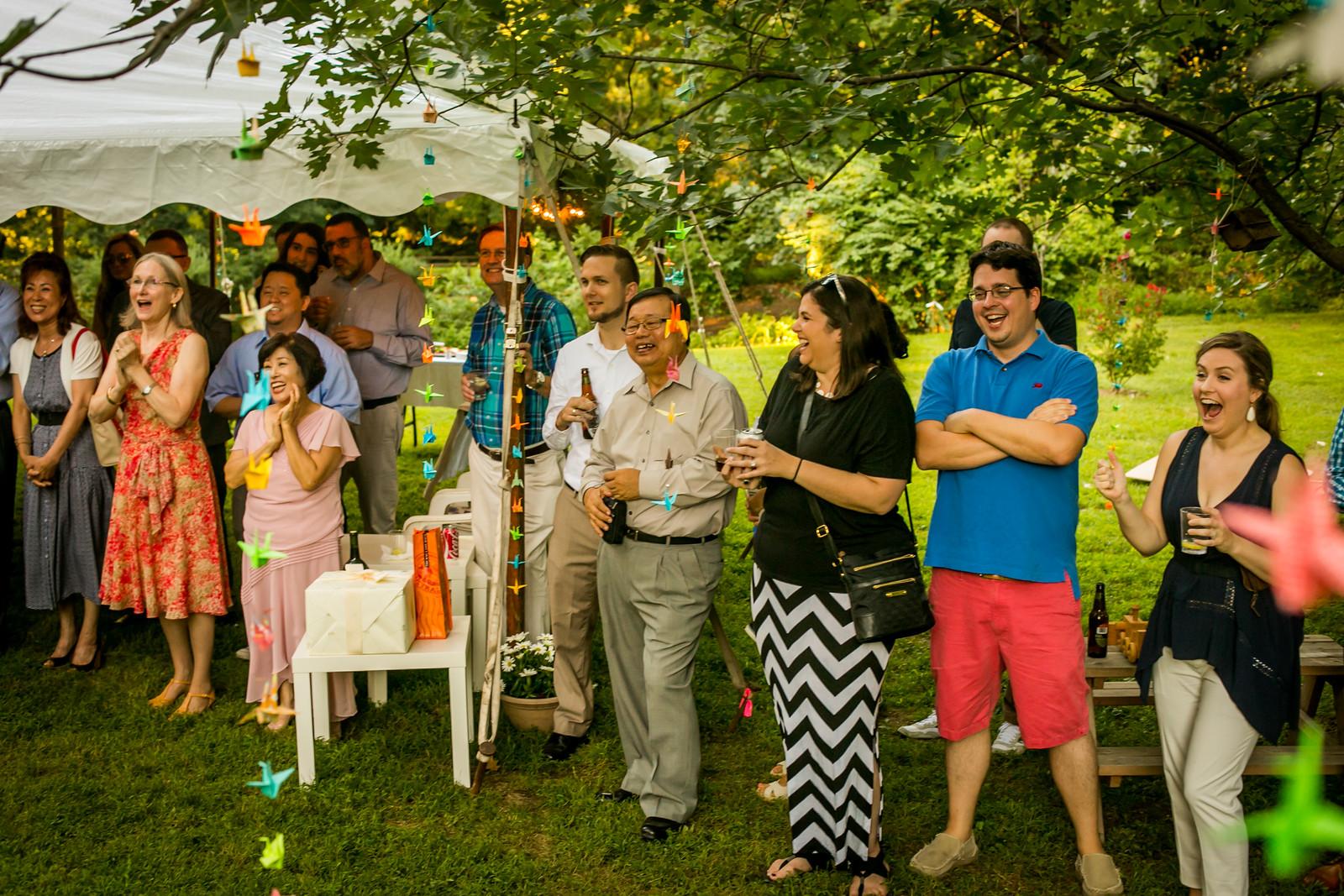 Seriously, we loved the reactions! When our photographer Ashley from Wide Eyed Studios sent us the full resolution images, Graham and I had an awesome time zooming in everyone’s faces – shocks of electric happiness!

The whirlwind of costume change, ceremony prepping, makeup refreshing, and a “First Look” shoot took some time (oh, and in spite of my best attempts, I did go a bit neurotic bridezilla – sorry to our families behind the scenes!), but our guests were thankfully busy with their cocktails, appetizers, and interrogating EACH OTHER about who knew about the surprise. 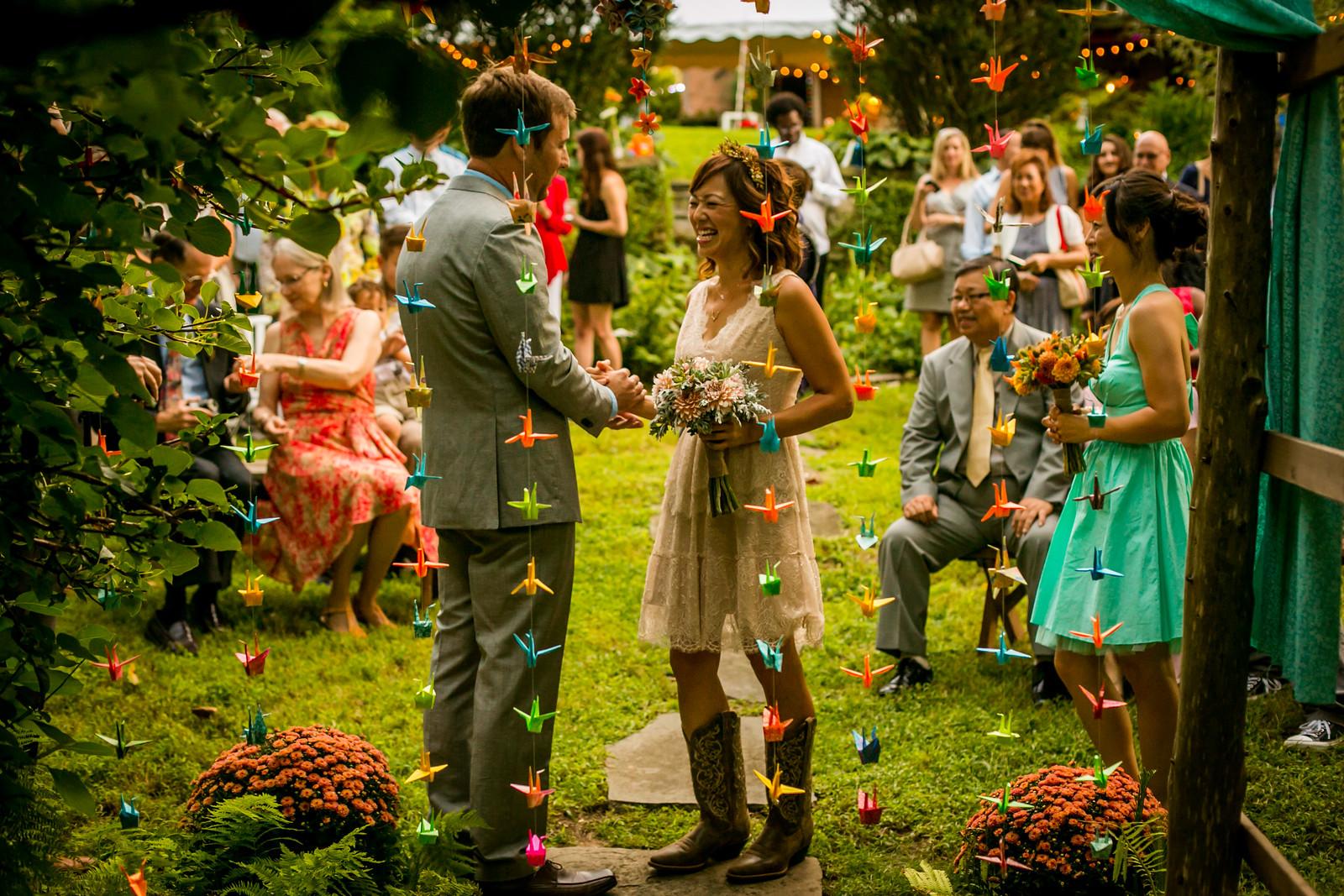 Before Graham and I had made the decision to have a surprise wedding, we struggled over cherry-picking traditions and also adding our own personal touches that might have seemed out of place to some people. We didn’t want people walking away with a confused, “What the heck kind of a wedding was that?” We wanted them walking away thinking, “That was a heck of a wedding!” By upsetting the applecart of expectations from the very beginning, the tone was set from the start – “Anything goes!” whether that meant a water gun fight (a shoutout to our engagement shoot), a ridiculous “Wig In A Box” dance, doing bourbon shots during the ceremony (our own take on the traditional Korean wedding ceremony), or pummeling a Nyan Cat pinata at the end of the night. 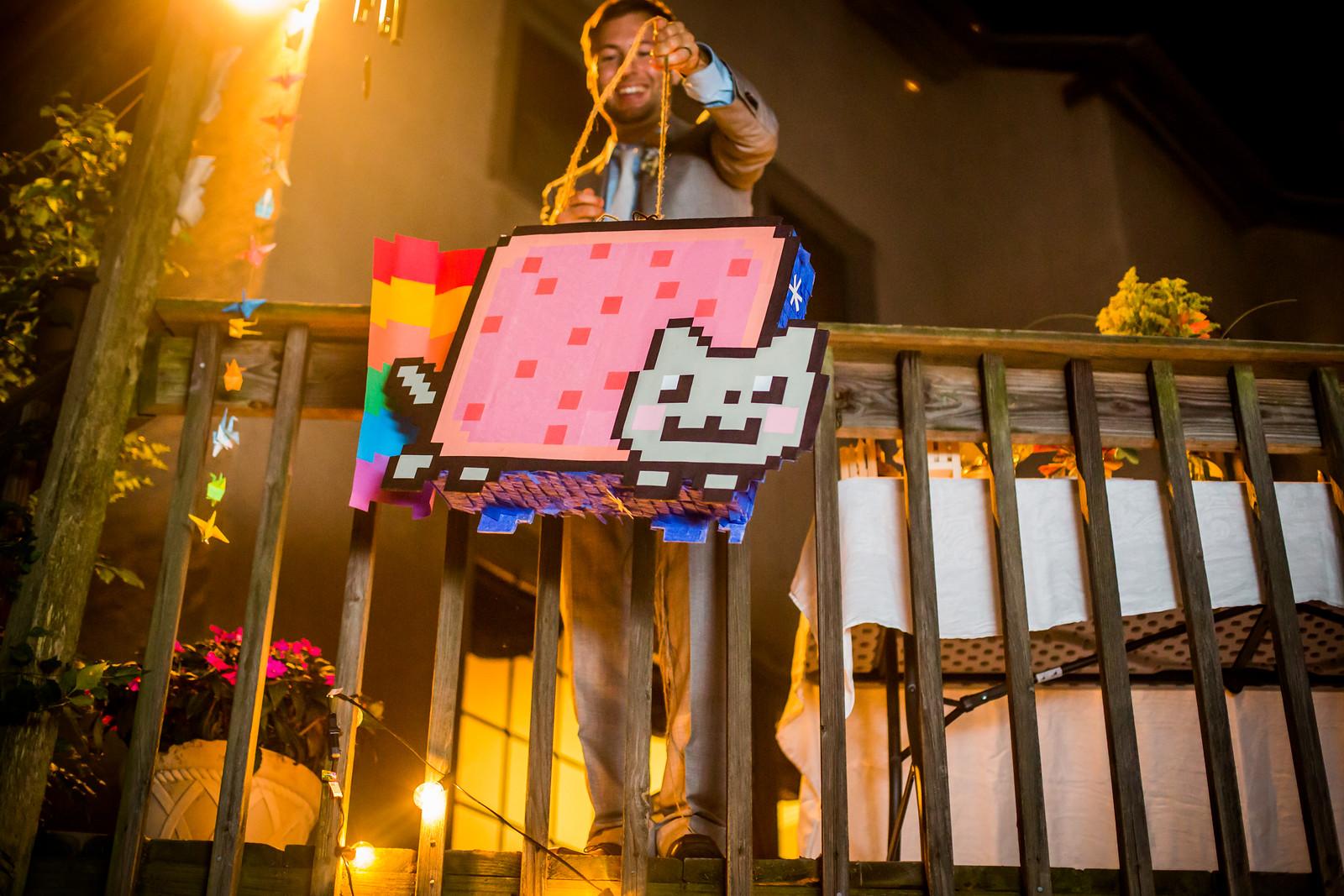 Admittedly, in the days leading up to the event, there were moments when I had misgivings about not eloping.. but that night.. neither Graham nor I had regrets with choosing to have a wedding. It might not have been traditional to most people, but in a way, we stuck with the playful silliness and sentiments of affection that had become our relationship’s own traditions.

It’s funny… now, whenever people ask us about our wedding, Graham and I both smile as we reminisce about the details, and instead of criticism, we hear, “WHAT?! Sounds like it was fun!” Maybe it’s because once the deed is done, there’s not much anyone can say after the fact but give positive feedback.. even so, we finally felt the way we should have from the beginning, it shouldn’t have mattered whether people thought we were doing the “right” thing.. but we knew it was “right” for us.

With the exception of the Shenandoah Valley waterfall pic, all photos are courtesy of Wide Eyed Studios.

PS. For anyone planning to go a similar route, I’ll be adding a follow-up post about what to expect and some advice from our own experiences.. because y’know.. now that we’ve crossed that threshold, we get to put in our own two cents to the engaged.