I’ve been suffering from brain-melt the past few days thanks to the heat index pushing the temperature over 100 in Philly. We’ve been trying to spend as little time outside as possible. It’s been a good excuse for me to pull out my two favorite summer films. Just as winter never feels complete without watching A Christmas Story all the way through at least once, there are two films that have become a summertime tradition for me. 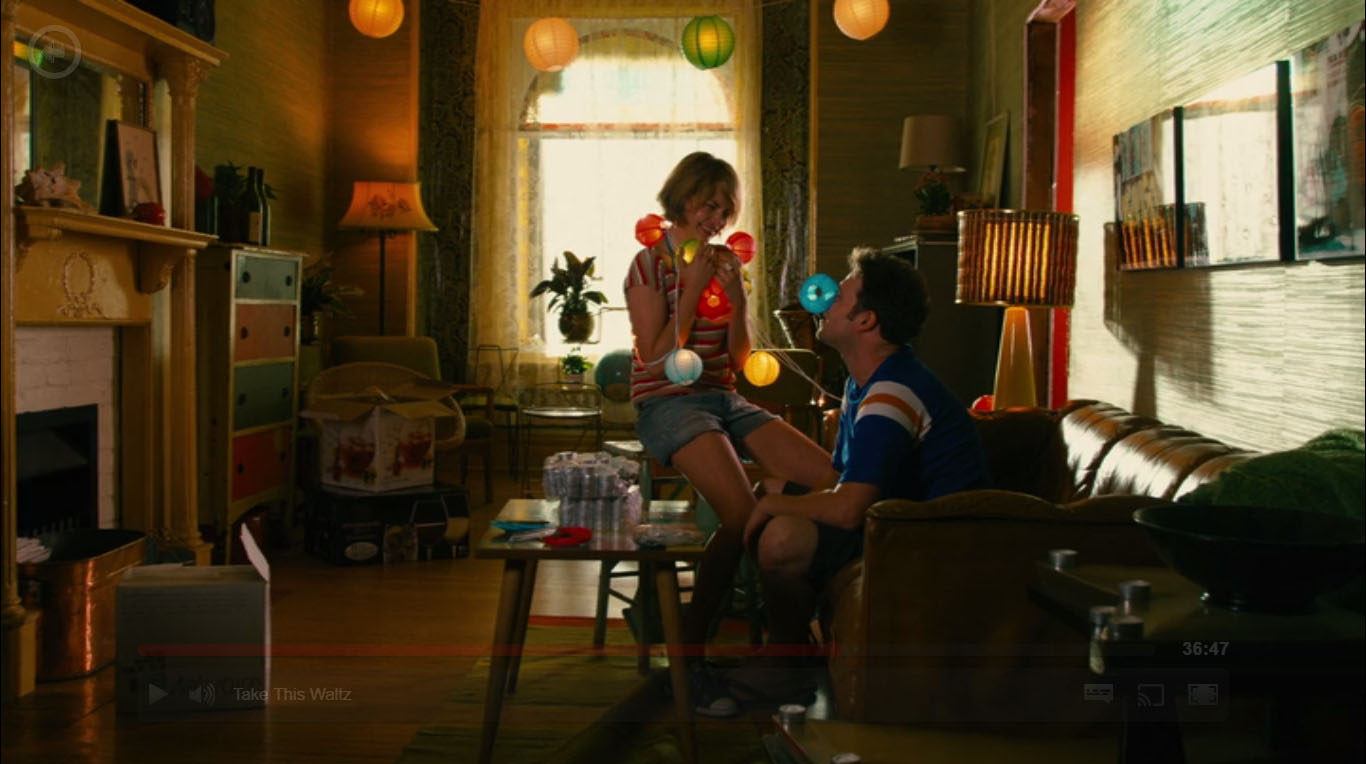 Today, I got in my annual viewing of Take This Waltz (2011), Sarah Polley’s second feature length film as director. I love watching this film every year because it’s so… PRETTY.There’s some brilliant work with the cinematography in the opening scene alone. The production design is by Matthew Davies who also worked on Hannibal, the all too short-lived series on NBC. If you’re familiar with the show, then you’ll know that the art department had skills in making the macabre appear breathtakingly beautiful. The film had me infatuated from the beginning with the camera flowing in and out of focus as Michelle Williams’ character Margot bakes blueberry muffins. Really.. you can tell it’s a sultry summer day and she’s baking blueberry muffins! I always feel the frugal side of me getting worked up about using an oven on a hot day, but all is forgiven because of the beauty of the shots. Even a simple close-up of Margot’s barefeet with her ocean blue polish is dreamy. 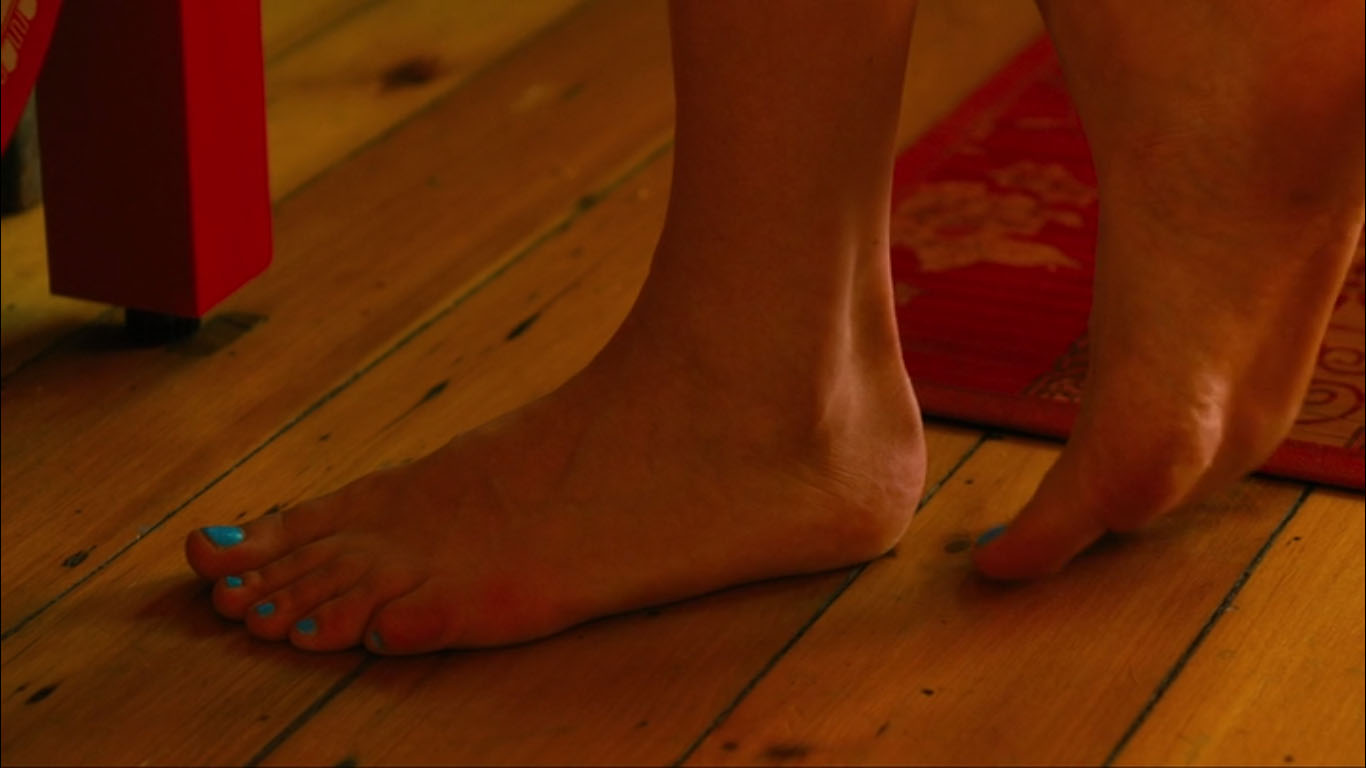 Ok.. enough gushing about the artistic direction. Oh wait, except the lighting. Seriously.. I love how this film is so visually warm with all the amber. Sorry.. this gives you some insight to what Graham has to deal with on a regular basis as I’m easily distracted by the way sunlights plays on objects. 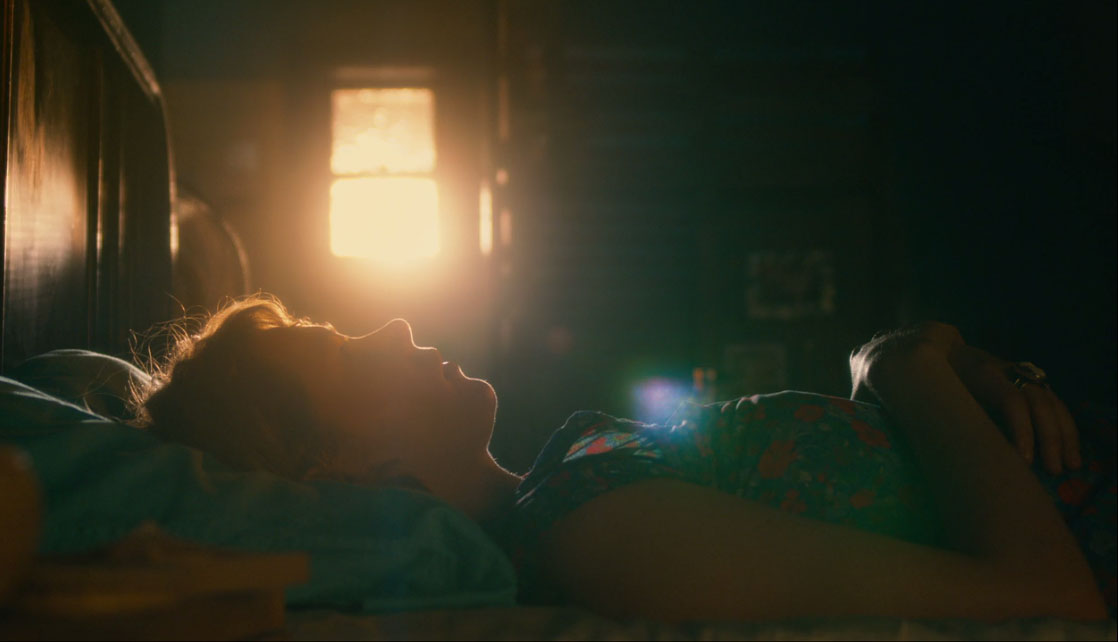 I could just seriously go on posting nothing but screenshots from this film, but for those of you who are interested in things like plot rather than hipster aesthetics.. let me tell you about the hipster storyline. 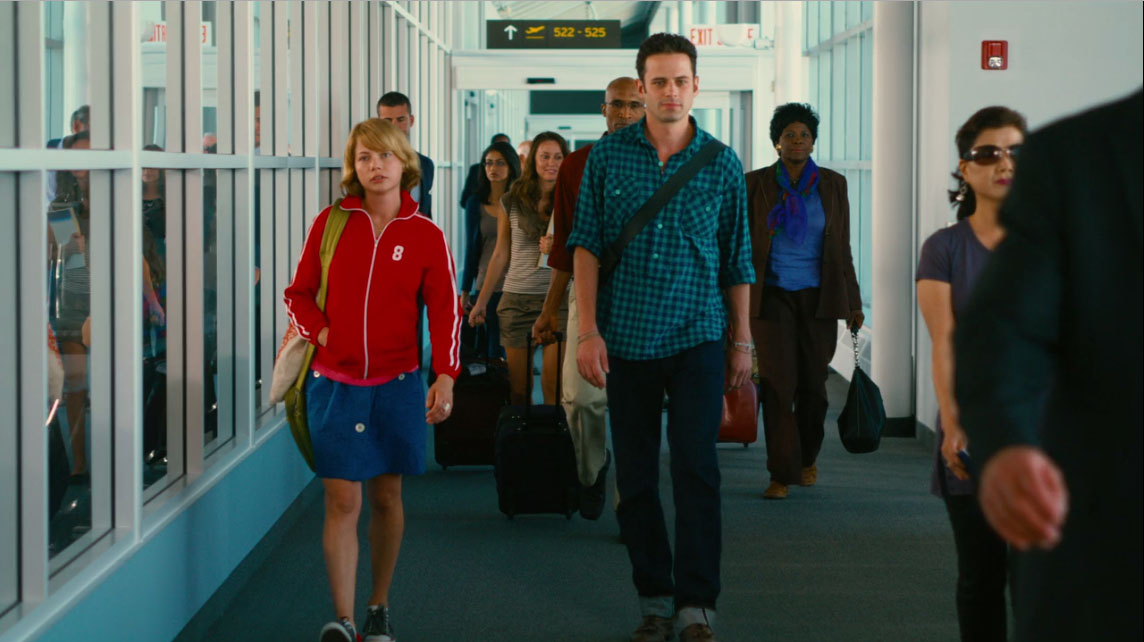 While on a trip for work, Margot meets Daniel (Luke Kirby) on her flight home and the two start up a flirtation. When they get home to Toronto, they agree to share a cab.. only to find out that they live across the street from each other. It’s an eye-roll rom-com worthy “meet-cute”… but there’s just this problem of Margot being married. Seth Rogen plays Margot’s husband of five years Lou.. a likable goofy guy.. working on a cookbook.. all about serving chicken. Just chicken. “You’re always making chicken,” Margot complains later in the film. So the movie is a little heavy-handed with the symbolism. 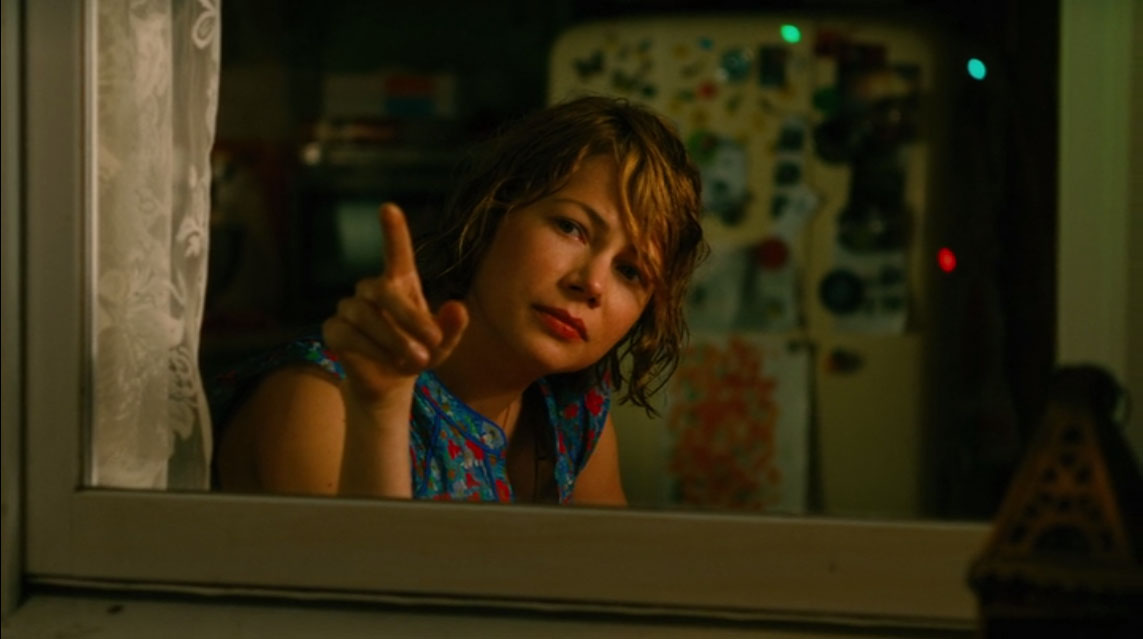 In spite of the temptation of a shiny new object being dangled in front of Margot in the form of Daniel, there are some really tender scenes between her and Lou. My favorite moment in the film occurs about an hour into the film as the two of them communicate more than they have since the start of the film while saying nothing at all and separated by the kitchen window.

One of the biggest complaints I’ve read from various reviews on the movie deals with Margot being such a flawed character.. which really.. I feel, is the point. There wouldn’t be a story to tell without her flaws.. 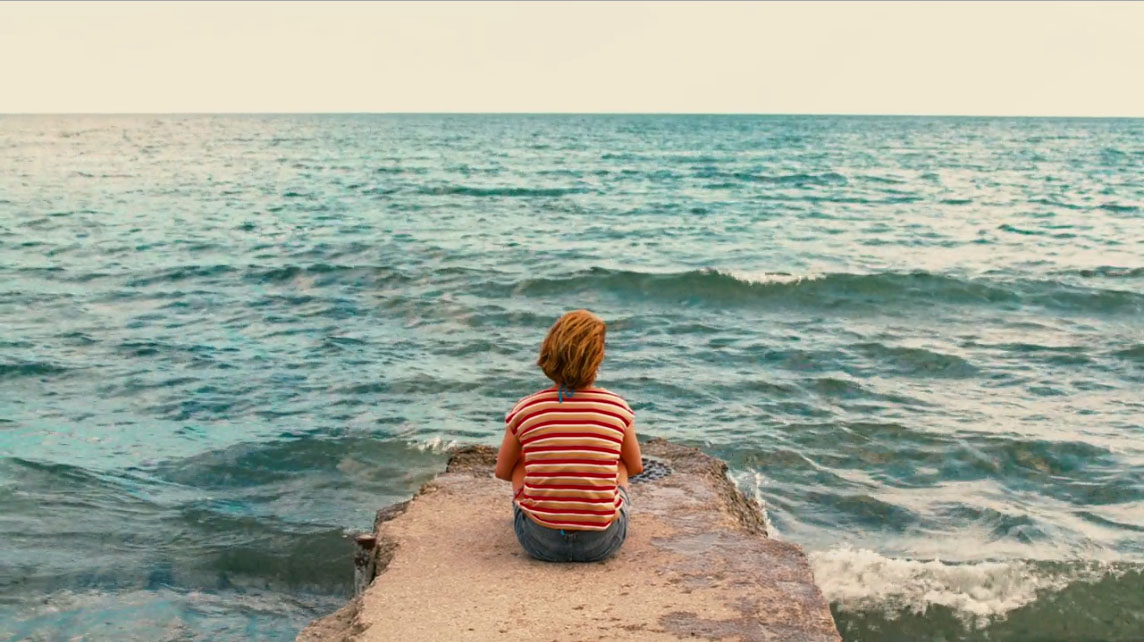 Sarah Silverman makes an appearance as a supporting character, and although I’ve never been a fan of hers, she really shines in the film as the intuitive observer, reiterating the wisdom in the comment made by the older women in the shower scene at the pool, “new things get old just like the old things do.” The same needs to be said of Seth Rogen. I was skeptical about the casting decision, but he’s successful in making me forget how much I dislike him.. fully embracing his role.

I watched it together with Graham for the first time 2 years ago. He thought it offered an interesting perspective as far as the “couple drama” goes since he’s usually watched films that offered the male perspective unless.. as he put it.. “it’s the Nicholas Sparks bullshit.” He enjoyed it.. but it has forever made him wary of “hipster rickshaw dudes.” 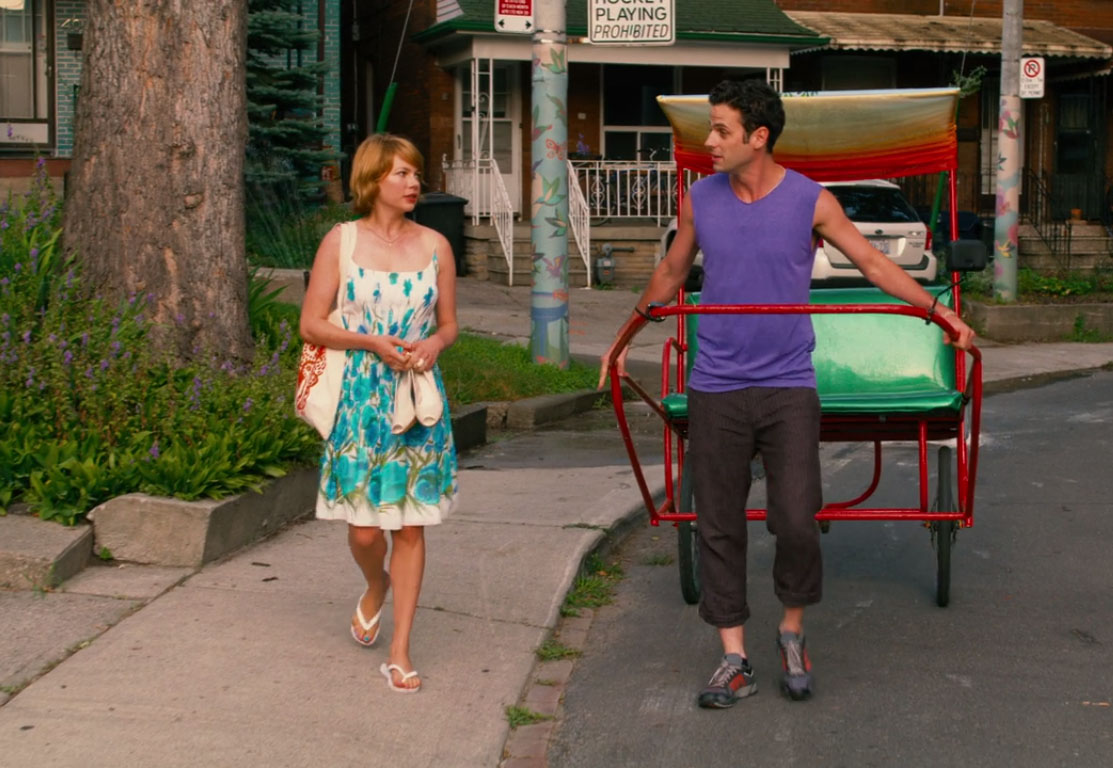 Graham’s actually never watched my second summer film with me.. or at all for that matter.. something we’re going to remedy before Thursday’s post.. much to his chagrin.

On the plus side for him, there’s no hipster rickshaw man indiscretions in that one nor does “Video Killed the Radio Star” ever play in it. I should probably add that as a warning for those of you who are susceptible to earworms.

Take This Waltz is available for streaming on Netflix.